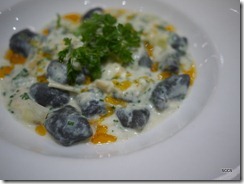 fair french in bond street. I’m not sure that’s an accurate description of galvin’s bistro, since I did completely love the experience. however, I’m pretty sure I’ve had better european elsewhere.

service was good – though the lady at the entrance was a little cold – we always had our glasses filled, and service was both warm and friendly.

we started off with a mushroom soup that was intensely-flavored, and worked so well with the crusty bread. the main was a squid ink gnocchi in a sort of seafood chowder; incidentally it was the first time I’ve had gnocchi and so I might not be a fair judge, but I thought the chowder was rich and very tasty but didn’t help mask the blandness of the gnocchi. I didn’t taste any of the squid ink, and it needed both salt and pepper so I could finish it. on a purely aesthetic note, the dish was just so attractive.

the meal ended on an amazing note though: a sophisticated sort of lava cake, except that here it was a firm mousse encapsulating a liquidy chocolate. it came with a sort of whipped cream which helped lift the richness of it. my friend had the cheese course, which was a large slab of brie – strangely with a whiff of cauliflower but tasty – with some raisin bread.

I’m not sure I’ll be back, but service was impeccable and it probably didn’t help the fact that I was late and hadn’t ordered the food myself. I think bistrot de luxe would be good for business lunches though.