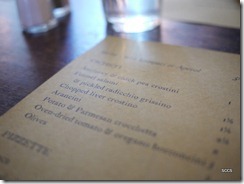 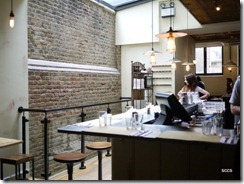 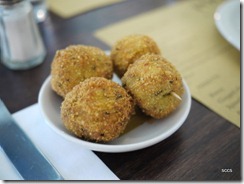 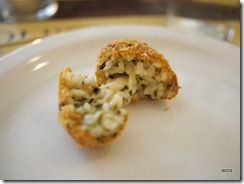 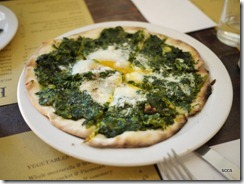 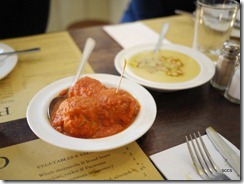 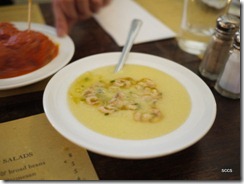 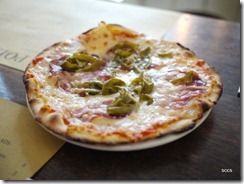 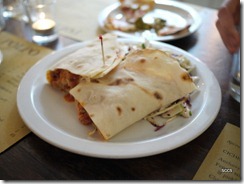 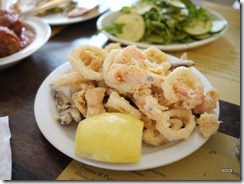 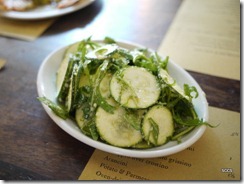 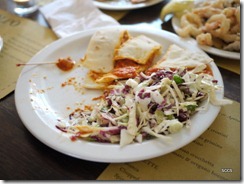 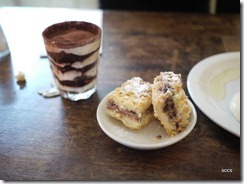 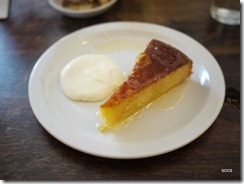 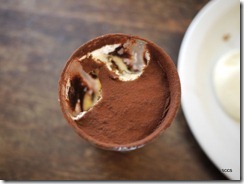 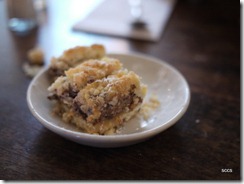 decent modern tapas in covent garden. I’ve finally made it to one of the vaunted tapas restaurants in soho – and only because now they take reservations on the weekends for lunch. I still don’t understand the no-booking policy with most restaurants – it makes planning to go out very difficult, especially in a group, and a group always spends more than a couple or a single diner would. also, how often do you go out as a couple and decide that it would be fun standing in line for half an hour or more for food?

on hindsight, saying “decent” makes it seem as though it were meant to be condescending, but really it’s in light of the way I would answer a friend if they asked me how the restaurant was.

but ranting aside, da polpo was relatively empty at 1pm on saturday, which I was rather surprised by – but it was probably just as well! service seems very stunted and still rather new, although the food came quickly enough.

we started off with arancini, which was a little bland, and this did set a stage for the rest of the plates coming off a little underseasoned. it was also very tiny, 2 small balls on a plate per dish and I thought a little too expensive for what it was. our pizette – really a crisp flatbread with spinach and egg – was quite good though. we later ordered a second pizette – some sort of ham/salami with pickled peppers – also quite a good dish.

da polpo is know for its meatballs, and we tried it in a piadiana smash – which means smashed meatballs with sauce in a wrap – the classic beef and pork mix, as well as the lamb meatballs. in the piadina smash we had the pork and fennel meatballs – I wouldn’t go for this if you dislike liquorice. we don’t particularly enjoy that black candy and so the taste here was a little overwhelming. still very good quality though, as were the other meatballs. the lamb, I was told, was the best of the three we ordered.

I can’t really remember the name of the next dish that came, but it was basically watery polenta with truffle oil and some tiny shrimp on top. this was a strange dish, a bit too runny to describe as baby food and too bland to really taste of too much. I salted it to make it more palatable, but that did detract from the taste of the truffle oil. not a great rendition.

the fritto misto that came was the best dish of the day, and also a fantastic plate of plate in its own right. it was the best seasoned plate of food amidst all the dishes we had, and was crispy and fresh and just a little on the side of too-salty, but in the best way possible.

our regulatory vegetable dish was one of rocket, raw zucchini slices doused in olive oil and parmesan. I really didn’t like this, but then I don’t really enjoy raw zucchini and the dish was really really oily. we didn’t finish this (and also didn’t finish the slaw that came with the piadina smash which was bitter and mayo-ey and really not to our tastes).

dessert came, and I’m glad we decided to order this because it ended what was otherwise an average meal. I don’t particularly love tiramisu, but the rendition at da polpo served in a tiny glass was so good. well-balanced, not too creamy, but oh-so-satisfying.

the orange cornmeal cake was underwhelming but not too bad as a sweet, and the chocolate ricotta crumble we had was also very good (I really had to stop myself from finishing it).

so da polpo is a relatively good restaurant, though I do have other restaurants in london I would rather go to. still, I’m glad I’ve tried this. now that’s spuntino and da polpo down, and I should decide if I want to visit pizarro and the others! have you any recommendations?

my recommendation: go to spuntino if you want delightful small dishes of food!