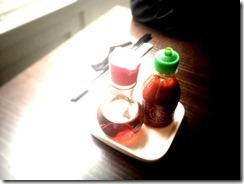 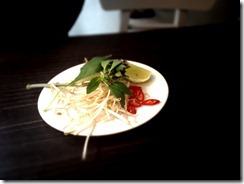 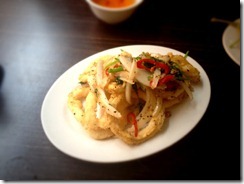 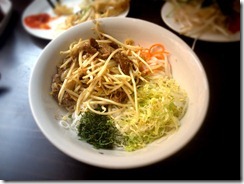 decent vietnamese in soho. I’ve walked by this place before and always thought of going in, and finally made up my mind to try it when i was in the area. entering the store makes you feel as though you were in vietnam itself, with shouting (the most common way of asians speaking) in vietnamese as well as the mostly asian patrons.

we started with a fresh rice roll with pork belly which was freshly made but the skin was a bit too thick. the ingredients were generous though. our second appetiser was some fried squid with salt and pepper, and this was very tasty if just a tad greasy.

I was actually hankering for cold noodles that day so I had bun, which refers to rice noodles with a cold dressing, topped with pickled vegetables and my choice of stir-fried beef. it was a really good dish, very large and extremely filling. my partner had the special pho, which meant that there were two types of sausage as well as beef in it, and came in the traditional manner with a side of fresh uncooked vegetables which you can put into your hot soup to soften as you’d like. the sausage was good but the broth was rather salty and had the aftertaste of MSG.

the food here is relatively cheap and decent, but I would stay away from drinking the soup from the pho – a disappointment since that is the star of the show – and the fried squid is a good choice. just be forewarned – during the same night I was suffering from salt burn even though I hadn’t felt it during lunch and so can’t confirm whether it was from this restaurant, but you know, just in case.

also, cay tre is just down the road and I think I might just go back there if I was in the area and wanted vietnamese. I had a great time there during my last two visits, and the food there is better, if slightly more expensive.