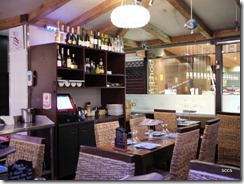 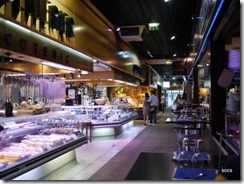 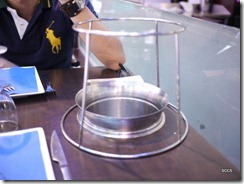 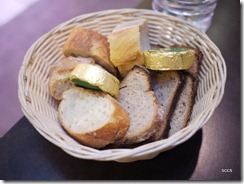 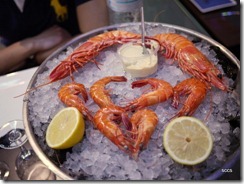 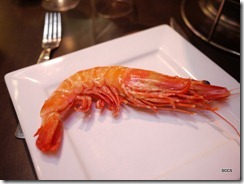 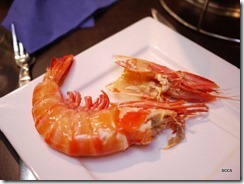 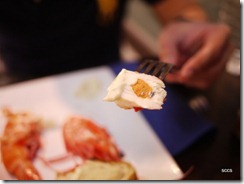 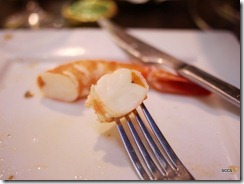 fresh seafood and wine bar in downtown lyon. I had very excitedly arrived at the halles de lyon after reading some recommendations online, but we found most of the shops closed, and the market a sort of ghost town. there were a few grocers and butchers open, as well as a couple of bakeries and chocolate shops, but most of the restaurants were closed. we thought it might have been the awkward time we arrived (at about 2pm), but when we went back at 7.30pm to retrieve the hat I had left there, most weren’t open either.

anyway, we missed the bustling atmosphere that we thought it would have, and my partner got mesmerised by the cold seafood laid out on the ice counter at this seafood bar. there were only about three other people at the bar having a bit of wine, and we thought we could get some seafood grilled/fried to order, but were informed the cook was away, and so we settled for the cold seafood.

this wasn’t any sort of problem at all though, as we did end up ordering two large (“jumbo’”) prawns for 10€, as well as 6 smaller, much less expensive prawns (I can’t remember the exact price, sorry!) as well as a glass of white wine. our waitress had a smattering of english – enough for us to order and know what we were ordering – and was very friendly and helpful.

our glass of white was crisp and dry, the way we like it, and we were served the requisite basket of crusty bread with some very nice salted french butter. our seafood latter came on a large metal platter of ice with a ‘seafood-style’ dip, which was very tasty and a step above the usual ketchup-mayonnaise mix you’d get in lesser establishments. the jumbo prawns were very sweet and fresh and tasty, and even had a centre of roe running through it – as you can see from the photos!

the seafood were all very fresh and came off the shell easily – and we enjoyed ourselves incredibly. the french really do know how to live, and my foodie soul remains in constant awe – and envy – of the food they have access to. come here for a french sort of high tea; it was one of my favourite meals we had in france.