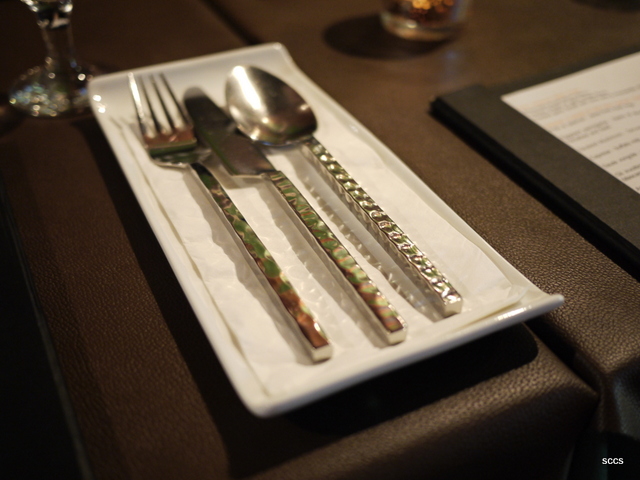 hugely unimpressive italian in holland village. we didn’t really choose to come here – we were looking forward to yet another dinner at the handlebar – but my parents remembered that they had been taken in bought a sort of deal while gallivanting in holland village a couple of months ago and the voucher was soon to expire.

it turned out – as it probably always does – that the deal wasn’t nearly as good as we had expected. we received a bottle of wine (which we haven’t tried and so I cannot comment on but please let me tell you that it does not inspire) as well as 50% discount off the less-expensive half of the meal. I’ll start this by letting you know that while the food was decent although uninspiring, I am unlikely to come here without the discount as even with it, it still turned out rather more than I wanted to pay.

the rest of my family started out with oysters – none for me, thank you very much – and I was told they were fresh and decent-tasting, if not particularly sweet or tasty. they came in two forms, either raw or broiled with cheese – which was apparently really tasty. I liked the fact that the cheese was stringy, but I have to admit to a certain juvenile instinct when it comes to cheese – if it strings and stretches, it’ll work.

we went straight to mains, which brings me to mention that though the menu was extensive, the price-points of the dishes as well as the mixtures of ingredients didn’t really inspire me at all and so we basically ended up with rather simple ones. I had a baked halibut with spicy plum salsa sauce which was flaky and well cooked, and came with a measly portion of vegetables as well as mash. the salsa wasn’t spicy by any means and was quite sweet, but not bad at all. around the table was a tenderloin with truffle sauce – not impressive but decently done, a seafood pasta in a tomato sauce and spaghetti vongole. the vongole did come with a generous amount of clams, and really the dishes were all competently managed, if not very special.

we also ordered a mixed platter to share, which came with a few prawns, some dried-out salmon and a tender piece of chicken thigh. also not bad, but not great.

I suppose the trend of this meal was a sort of mediocre satisfaction – good enough to eat and recognise that the kitchen isn’t too bad, but not good enough that I would recommend it directly. however, with the caveat that if you require a place to eat in holland village with a small group of friends, without a care for budget or the idea of worth and value, then this place is alright. that’s a huge caveat though. in the end, it’s not worth it if you were to pay full-price, and even at supposed half-price, it just about barely passes since the food was decent but really it was too expensive for what it was.

p.s. I neglected to mention that service was haphazard, even though we were seated in the middle of the restaurant. they were also very unfriendly with regard to our clarifications to the voucher and deal – where else did they expect we would get the information from but them?