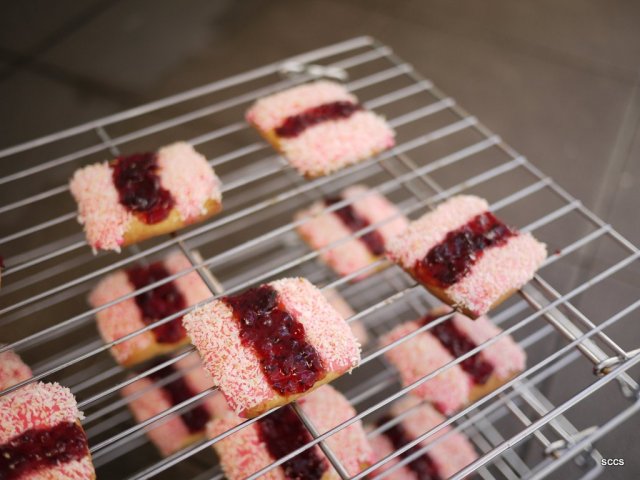 forget all the easy recies I’ve been providing you with – these ones are a veritable operation. mixing, chilling, rolling, shaping, baking, icing and dusting and icing, these took me the better part of a morning and far more pink than I’ve ever handled.

so iced vovos – I didn’t know what these were until my mum showed me a photo of an australian magazine’s recipe of prettily iced cookies, and I’m not sure I completely get the point of them even now. a basic cookie topped with coconut-topped marshmallow icing and jam, these are an australian tea-time treat by the same company that makes the more popular chocolate tim-tam cookies. I’ve never had the commercial ones before so I have no basis on which to judge these cookies, but I don’t think I’ll make these again (recipe here).

here’s what didn’t work for me:

I dislike food waste, and it’s particularly bothersome when it uses such a great amount of ingredients that could have gone into more deserving things – which is also a reason as to why i don’t usually use recipes from magazines or books, and this one, unfortunately, hasn’t changed my opinion of these publications.

if you are interested in reinterpreting this cookie – it is admittedly gorgeous – here’s what I think you could do: use a crisp and buttery shortbread cookie as a base – they keep their shape better and taste remarkably superior – and top it with purple-hued (I think this makes a more pleasing contrast with the darker colour of jam) royal icing with toasted coconut. they have so much potential to be a great cookie – and if you ever try these, let me know!