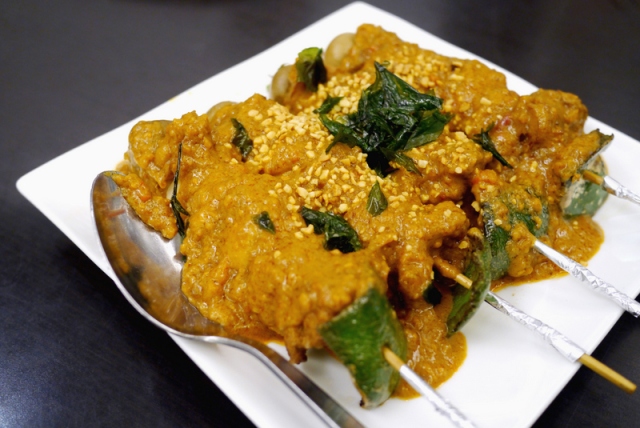 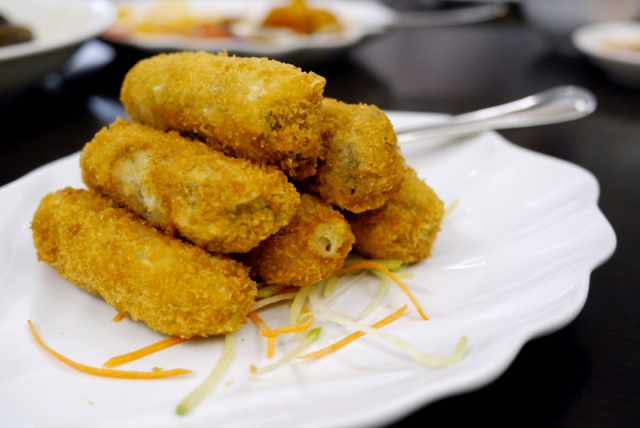 incredibly fantastic chinese vegetarian at novena square. my dad’s been talking about this place for the longest time – and we’ve walked past it for years – and I’m so glad we finally came. chinese vegetarian food can be a bit of an unknown beast, no matter how often you eat it, because some places rely heavily on gluten and flour/bean-based mockeries of meat; a huge travesty since there is so much beauty in well-cooked vegetables and fungi. this place falls squarely in the celebrate-the-best-of-vegetables category, and is my recommendation for a vegetarian chinese-new-year-or-not dinner, if you’re so inclined.

I must preface this by saying that this meal was even more delightful to me because of the travesty of the vegetarian meal I had at lunch with my colleagues – I think it was eight courses of rather terrible mock-ups of meat in gloopy sauces, and only one or two dishes were composed of actual vegetables. my gloom was settled further when they served vegetarian sea cucumber – really just some colored piece of jelly – and the mushrooms in the stir-fries were gloopy and coated with chunky cornfloured-sauce. eek.

needless to say, I came here both with the greatest optimism, and low expectations, the latter of which was unnecessary. the food was fantastic, the vegetables were abundant in quantity and sweetness, and their techniques marvellous. these dishes were part of a chinese-new-year ala carte menu, so very appropriate if you’re still on a lookout for a restaurant, which is but a mere subset of their full menu – something I’m really looking forward to trying.

we started off with two bowls of soup – a thick hot and sour soup that was surprisingly (and very nicely) spicy, as well as a spinach soup that was essentially a very savoury consomme with blended spinach and water chestnuts. the waitress then served what she termed sweet and sour pork (咕嚕肉), though it’s written as sweet and sour monkey-head mushroom on the menu. it was lovely and extremely good – the batter was as it was in the actual porky dish, the sauce well-seasoned, and the mushrooms had a good bite.

the next dish was satay, and it was a special order off the full menu – so request for this if you do visit. skewers with mushrooms, peppers, slices of beancurd roll and water chestnuts, these come covered in a blanket of chunky satay sauce – a sauce unrivalled by any I’ve had before (I am obsessed with peanut butter, so it’s probably no surprise that I loved this) – the play of textures and tastes were so good.

our dish of cabbage and mushrooms arrived – which sounds inconspicuous enough – but this was a recommendation by the waiter for a good reason: the cabbage was silky and tender and sweet. I forget the name of these lotus root croquettes that followed, but you’ll find it easy enough on the menu (or show them the photo) and really, please do yourself a favour and order this. it’s crisp with a thin breaded exterior and the insides is this mix of crunchy lotus root and beans bound by a sort of mash. forget the mayonnaise that it’s served with: it adds no flavour to the sticks, and the chilli sauce they provided at the start of the meal was a far greater accompaniment.

the eefu noodles finished off the meal – one of the better renditions I’ve had in a while, these were savoury and had that wok’s breath – or wokhei – more usually associated with lard.

we had desserts: a hot almond paste with white fungus, a hot coral seaweed and a cold mango-sago. they were good, especially the almond paste, but nothing as spectacular as the main dishes.

I’m full of praise and poetry for this meal, and I think it might be the best meal I’ve had this year. I don’t think it’s fair to say merely that you don’t miss the meat – though you really don’t – it’s far more accurate to say this would make a vegetable enthusiast out of you.

One thought on “lingzhi vegetarian, novena”