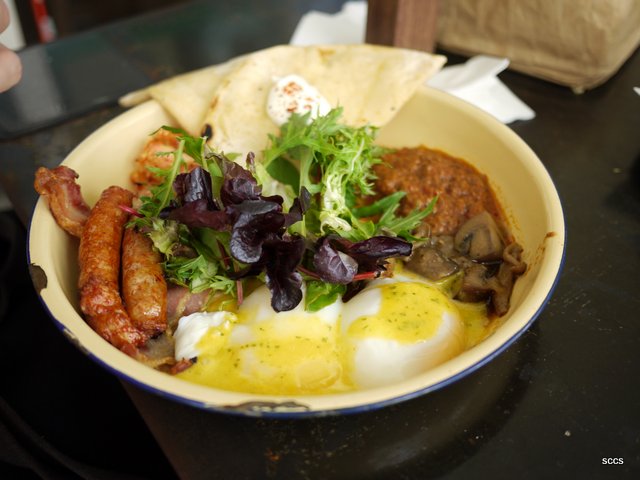 not-so-great over-hyped hipster brunch-type place in tiong bahru. I’m late to this place – which many bloggers have already hyped about – on purpose, primarily because I don’t care for queues and hype, and only came to this place while visiting some friends. it’s not crazy expensive in itself, and the food wasn’t bad, but it certainly isn’t cheap enough to return on that account – nor is the food great enough to return for (though apparently the coffee was pretty good).

this place is certainly pretty – very kitschy and hipster in their unfurnished furnishings and retro tumblers. it’s a sort of pretentious living – not that I don’t appreciate it, even if I lack the ironic hairstyle and too-cool-for-school ‘tude. we sat outside, but essentially you queue at the counter and pay, grab a number and return to your seat with tumblers of water before your food gets delivered. there’s a glass cabinet inside that holds a couple of delicious looking scones and loaf cakes, but I didn’t get to try these.

the unanimous conclusion was the coffee came both pretty and good, so you should get a cup if you’re into that, and maybe a delicious-looking scone or two. the food was a little less inspiring: a small and rather overpriced menu consisting of some egg or sandwich options, there wasn’t a whole lot to choose from. a small menu usually denotes focus and skill, but not so much here.

I had the jamaican pork sandwich, which was supposedly a specialty; it did have two slices of satisfyingly thick bread, and the filling was tasty enough, but it wasn’t anything spectacular or filling. on the table were also a couple plates of their big boy breakfast, essentially an english fry-up – these were still acceptably satisfying, with grilled tomatoes, sausages, bacon, scrambled eggs and a couple pita portions. a friend’s order of eggs en cocotte was pretty in an earthernware pot, served over some greens and mushrooms, though a tad small.

again, the food wasn’t bad, but it was nothing spectacular or worth returning for. I’d suggest coming here if you were in the area and wanted a cuppa and some cake – because those scones and loaves did look pretty interesting, and the coffee good – but it’s not really a food-centric place by any means (perhaps it really isn’t supposed to be, so you might be better off with the local food offerings around!).