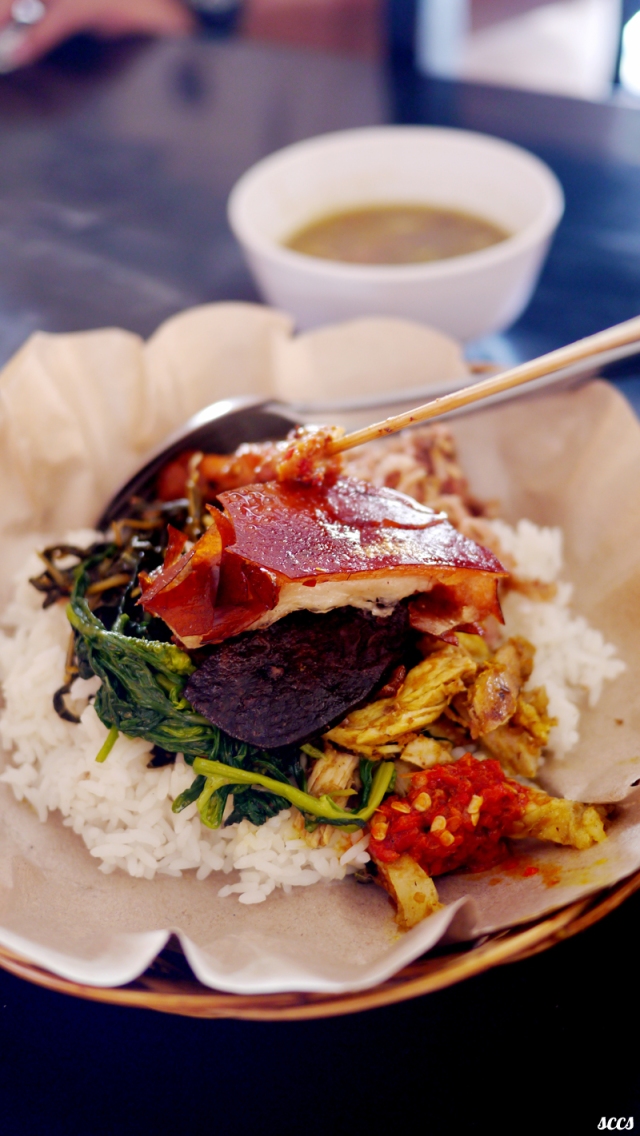 pretty good traditional balinese roast pig in the town of kerobokan. this is my first post of a few on bali, and what better way to start than something rather regionally famous? now, I’m no connoisseur of roast pork – I also don’t appreciate things like crackling – so the credibility of this post is based on our local driver’s recommendation, as well as my partner’s appreciation for the food.

babi guling is essentially the indonesian/balinese equivalent of the roast suckling pig, so common in chinese cuisine – and although 87% of indonesians are muslim, 93% of the balinese people are hindu, and so pork-of-crispy-skin isn’t quite as out-of-place as I you might initially  think it to be.

we were brought here en route to the villa by our driver, after he found out that we were a tad hungry from our early morning flight. this place is a rather modern eatery compared to the many roadside warungs – which refer to small family-owned operations – with matched furniture, drink coolers and food displays.

the chinese serving of suckling pig comes simply-seasoned, as a piece of crispy and glistening skin underlaid with a bit of white porcine fat served alongside slices of meat; here, we were served a rustic plate of coconut-scented rice topped with some crispy skin – look at those shards! – a satay skewer, bits of stewed pork and other vegetal condiments. it was a highly-seasoned plate of food, full of flavours and textures. there was also a slice of what looked like blood sausage – it was a little tough and dry, and rather livery at that.

take care with that chili, it was proper spicy and not necessarily the best thing to take while seated in an already-hot cafe, though it was very tasty. I’m really not one for strong-tasting food, so we didn’t really search out babi guling again on this trip – it was rich, fatty, and very taste-full – but I was glad we got the chance to try it, and the partner did clear his entire plate (and a bit of mine too). 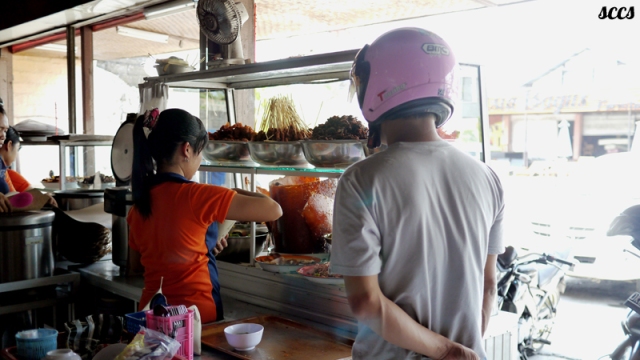 p.s. just have a look at that perfect roll of shiny pork skin in the last photo – they cut off bits for you with your order – this was precisely what I came to bali to see, and the only thing I regret was not having seen the entire pig rotating above a spit!

p.p.s. if you’re british, and wondering what the difference is between this crispy pork skin and crackling – asians roast animals till the skin is thin and crispy, and really almost delicate, whereas british crackling is a thicker specimen, crunchy rather than crispy in a popped sort of way, and retains a lot more fat under the skin.