good japanese chain outlet at the top of the raffles city shopping mall. so you must know by now that sushi tei is one of our favourite places – it’s become our regular hangout for decently reliable food at reasonable prices, and this was the first time we made it to the raffles city branch. this outlet isn’t anything particularly special, but we made quite a few good choices on the menu this time (instead of sticking to our regular orders) and I’d like to share. just because I’m nice like that.

to be sure, this outlet isn’t the best one (the paragon one is). the central portion of this place is occupied by a maze of conveyor belts and lots of round boots decorated with long rope hangings – but the back (where we were seated) is a rather cramped, darkish rectangle of mutliple booths for two. it felt a little like office cubicles actually, so I wouldn’t say this is any place to bring a date – but for a casual dinner it did us pretty well. it also helped that they had stationed staff around so we didn’t need to work too hard to get their attention.

but that don’t matter – because we had good food on the table (which means that the kitchens were well up to par – rather impressive for the crowd they were dealing with). we lucked out with our roll selections: the aburi salmon roll was fantastic – the salmon was generously silky and fatty, with a thin flamed outside with some char – and the ripe avocado added to the creaminess of each mouthful; so good.

the kaki mentai roll – or fried oyster wrapped in rice and seaweed and topped with cod-roe mayonnaise – was also another discovery. I think it was the textural contrast of crispy batter + soft oyster + creamy mayo that worked. there was far too much mayonnaise on it though – but we easily schmeared it away so it was left a subtle flavour instead of a cloying mass. 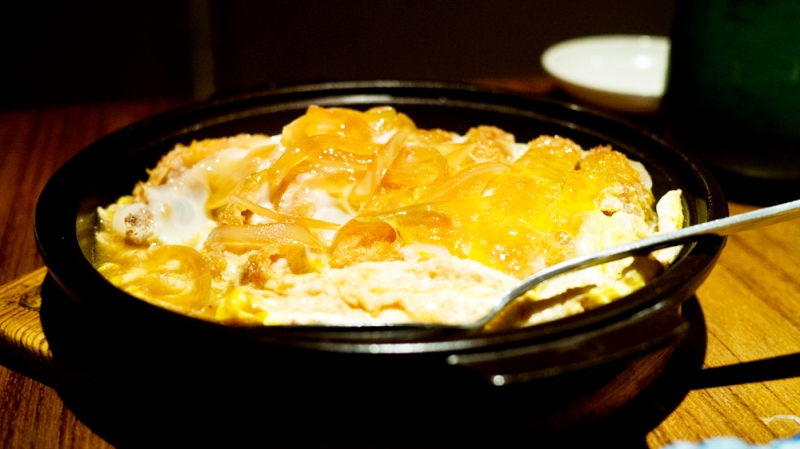 the kagoshima katsu toji was a breaded pork loin (or tonkatsu) simmered with egg in a sweet, savoury sauce – very akin to the sweet sukiyaki sauce you get, and with lots of soft caramelised onions. tender and moist and not-too-fatty – delicious and very comforting in its warmth, this was part of their seasonal menu (that I think will be available for a month more – go have a try!).

we rounded up the meal with a grilled salmon head (I prefer hamachi, but they were out) – crisp skin, moist flesh and lots of gelatinous bits, this went down easily enough with a big helping of grated radish and lemon. I often order the swordfish head over the salmon because of the jellyish collagen bits in the latter – but nothing beats the rich flavour of the pink fish.

so – a good dinner, made cheaper by a discount as members and vouchers (a result of loyal patronage) – we left both full and happy.