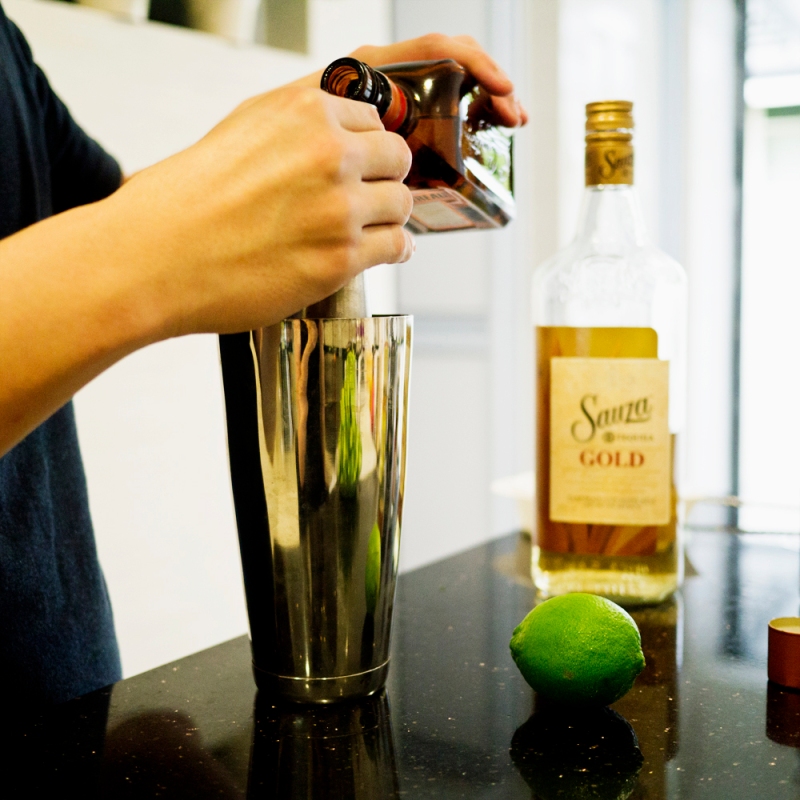 I bring you my first cocktail recipe on this blog (and the first proxy guest post), which came after my first experience cooking for a friend’s family. I have dreams of being the sort of proficient hostess who plans and executes dinner parties on a regular basis, and until I have my own house – I’ll take whatever practice I can get.

the friend has a pretty intense obsession with alcohol and the like – not to say that he’s a raving alcoholic (though not to say that he isn’t) – and he made this to go with some broccoli fritters I was cooking that night.

I wish I had photos of the appetizer to show you – the lighting came out all wonky – but I’ll tell you that they were little golden fritters of barely-bound broccoli florets, topped with some tomato cavier and a quail egg; and tiny shooters of this classic cocktail on the side. delicious.

4oz tequila (a Sauza gold tequila was used)
2oz Cointreau (you can use any orange triple sec)
2oz lime juice (thai seedless lemons or key limes, “none of that puny calamansi stuff”*)

*I’m a huge proponent of calamansi limes – my dad grows them in our garden, but my suggestion to use them here was rather forcefully rejected.

**my apologies for the language – it clearly isn’t mine.

this is my contribution to the monthly link party, our growing edge, which connects food bloggers and inspires us to try new things. this month’s party is hosted by Stacey at The Veggie Mama – and if you’ve had any new food experiences this month, come and join us!

3 thoughts on “a classic marg”