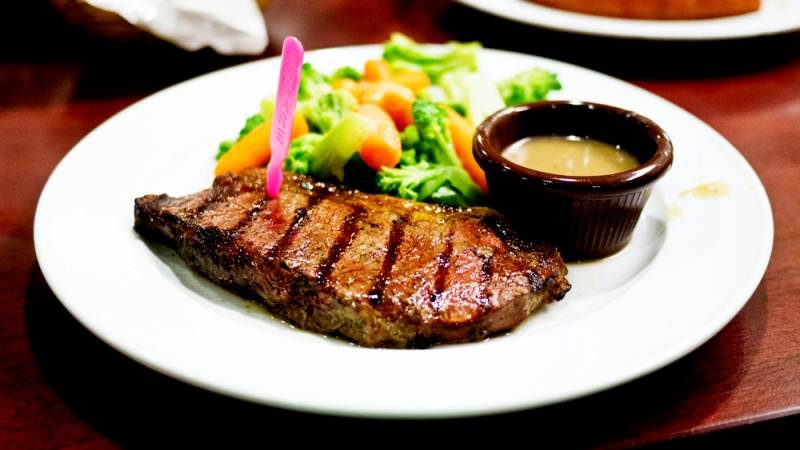 surprisingly good food at this value-for-money home-grown american-food chain-outlet at changi airport’s terminal one (phew, that’s a lot of hyphens). it isn’t posh dining – more coffee-shop western store grown up more than anything else, but there was some proper food on the table and an astoundingly small bill at the end. and while cheap-and-cheerful springs to mind, I think that’s an understatement for one of the most economical meals I’ve had in singapore recently.

if you’ve been to one of aston’s (this one or not), then you’re likely as surprised as I am about how positive this is going to be – but try not to scoff too early, alright? 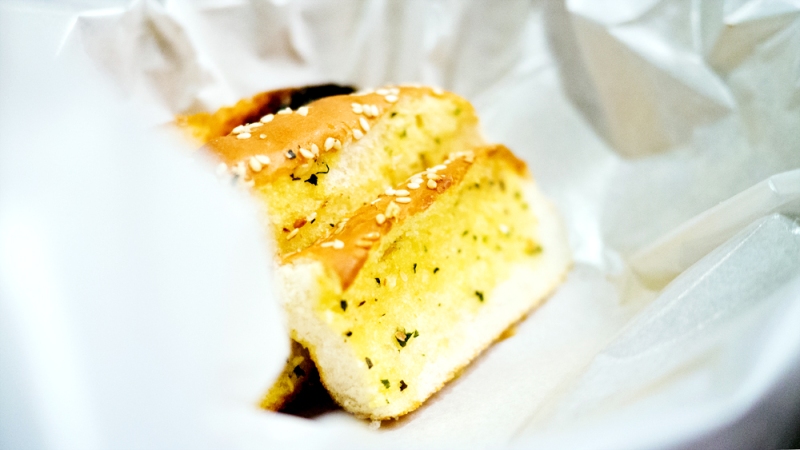 if you’re not in on the singaporean food scene, ‘western food’ stalls are a typical sight in kopitiams (coffee shops) and food courts, serving a common menu extracted from the cardiologist’s nightmare (or money-making dream) that is american deep-fried and pseudo-grilled-but-really-fried foods. in the last few years, some enterprising food-preneurs have been pushing out glamorous versions of these stalls, purporting to serve gourmet, good quality food at low, low prices – and aston’s is one of them.

this is the third – or fourth – outlet I’ve been, and the only one I’ve liked. the food isn’t that cheap, though admittedly cheaper than a restaurant, but most times I figured the price-utility balance was more in favor of hawker food. I suspect this outlet does well due in large part to a felicitous combination of more proficient kitchen staff and a larger crowd turn-around here – which means fresher ingredients due to constant replenishment. 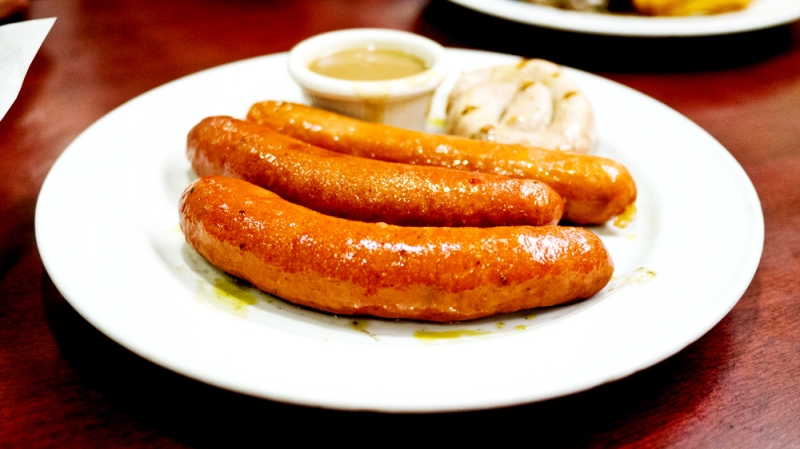 now, don’t go thinking that this place beats the socks off my favourite steak places – black angus and handlebar – because it doesn’t, but it does serve up good simple food (and really, the price is unbeatable).

we started with some garlic bread – a probably-commercial yellow spread on a halved french loaf – as well as a plate of sausages, which were very tasty. I wish I could remember what they were made of – the menu just says “grand sampler” – but those were some thick, bouncy, meaty sausages. a tad greasy, but these wouldn’t be out of place in a good hot dog bun under mustard. 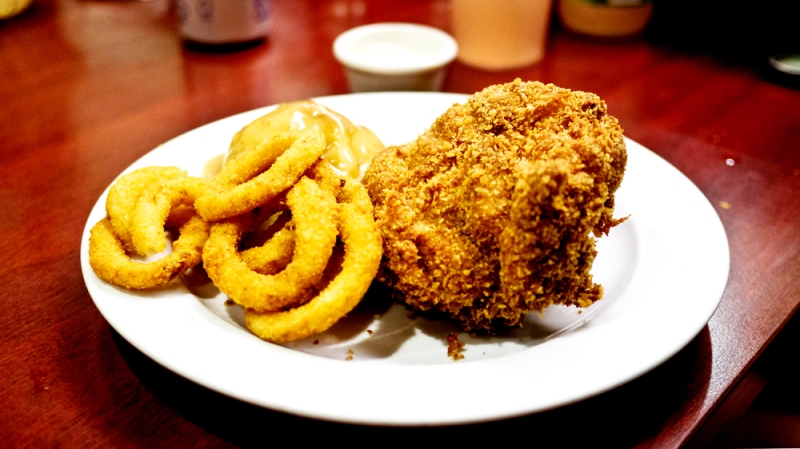 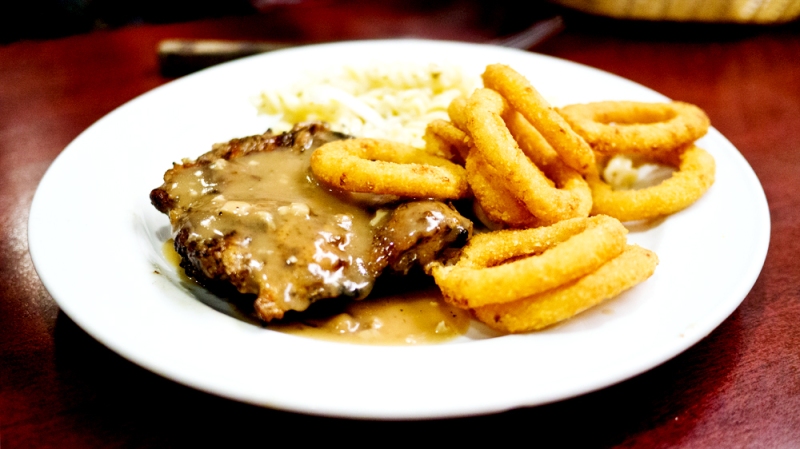 there is a large menu of mains – various permutations of fish, chicken, beef and pasta – and you generally pick a meat + two sides (how british!). the crispy fried chicken came with a good browned batter and tender meat – and the black pepper chicken moist under its blanket of sauce.

and I must mention the sides – because there are fourteen of them. far too many to mention individually (though all listed here, if you’re interested), but they run the typical steakhouse gamut from coleslaw to pasta salad, and corn-on-da-cob to your usual spud preparations. these are generic, commerically-prepared freezer/fridge-to-fryer operations, but exactly what you’d expect – and good in their own way. 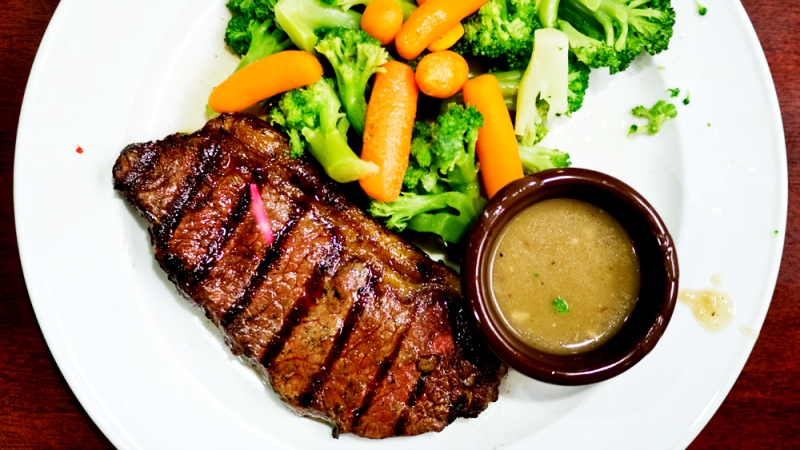 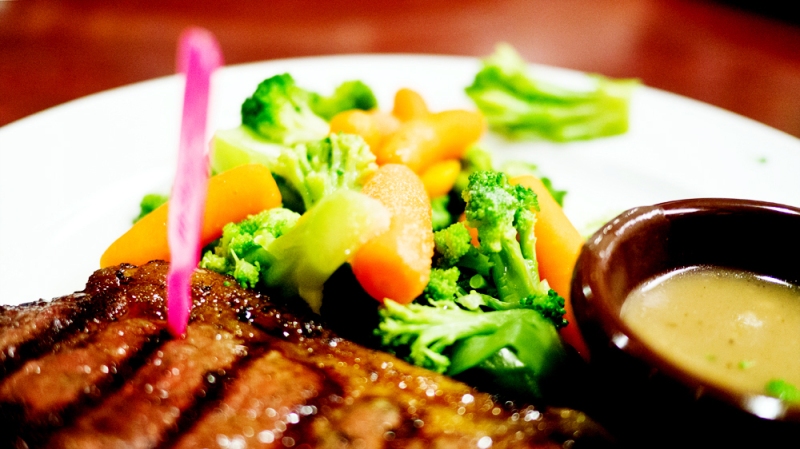 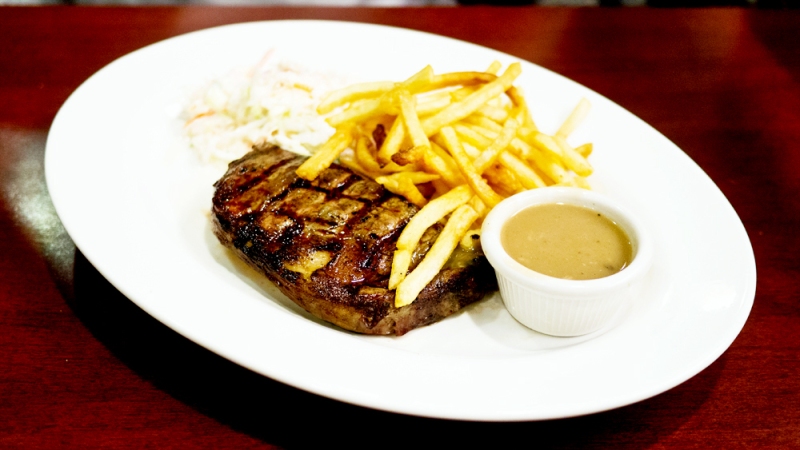 but I was most impressed with the beef – for coming in a sizeable portion and with well-defined char. it was beefy and moist – my sirloin was very lean (just the way I like it), so you’ll want to go for another cut if you prefer something a little juicier. nto the highest grade of beef, but a good enough one – and more than satisfying enough for a steakcrave.

the cooking is a little inconsistent – my medium-rare came a little more cooked than my dad’s medium – but both were pink, so it didn’t matter much. if you’re really bothered by this – then go one cooking measure below what you would ordinarily order. but I wouldn’t be such a stickler about such things here. 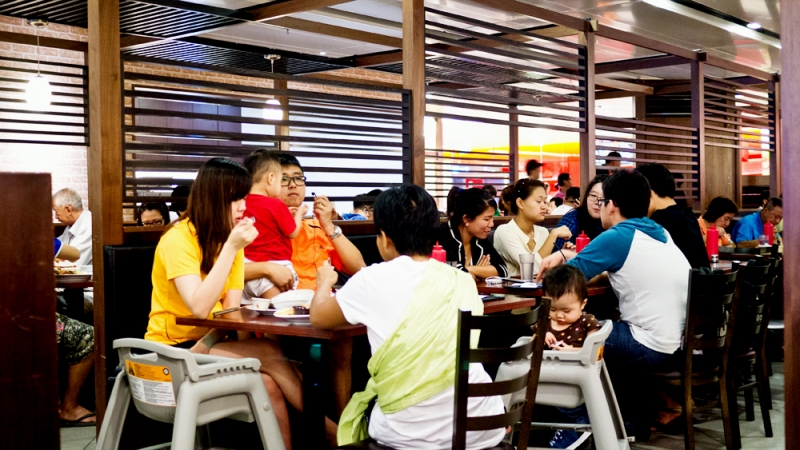 the open concept – not a cafe, not yet a restaurant (in the adapted words of britney spears) – makes for a loud, casual place for dinner, and also for scoffing at (and showing off to) those people still shuffling outside for a table. you’ll spend a fair amount of time out there in the queue yourself – this place fills up fast, but tables move relatively quickly, and orders are taken before you’re seated – so the wait for food is a little more bearable.

I think I must have mentioned the low-low prices here quite a bit now – which I usually don’t do – but that’s largely because I can’t quite believe it myself either. our bill ran cheaper than some meals we’ve had at more casual cze-char places, and it’s one of the most impressive meal deals I’ve had recently.

well-worth going for a steal – and if you get food as good as we had, then well-worth even that snaking queue.