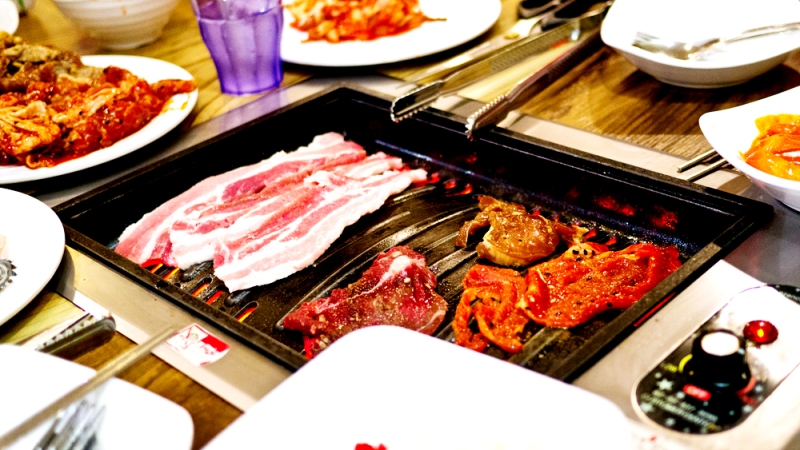 caution: lots of raw meat up ahead.

decent food-court-style buffet at united square – like a ever-so-slightly more sophisticated version of the secondary-school hangout that is seoul express.

I’m saying sorry upfront for only taking photos of the multi-colored bits of raw marinated meat – it was a large communal lunch not quite amenable to taking photos, and really – any pause in laying meat (and claim) to real estate on the grill results in someone swooping in under your nose to take your place.

plus, I was too busy eating to remember photos. but you know what cooked meat looks like, right? (full of excuses, I know.) 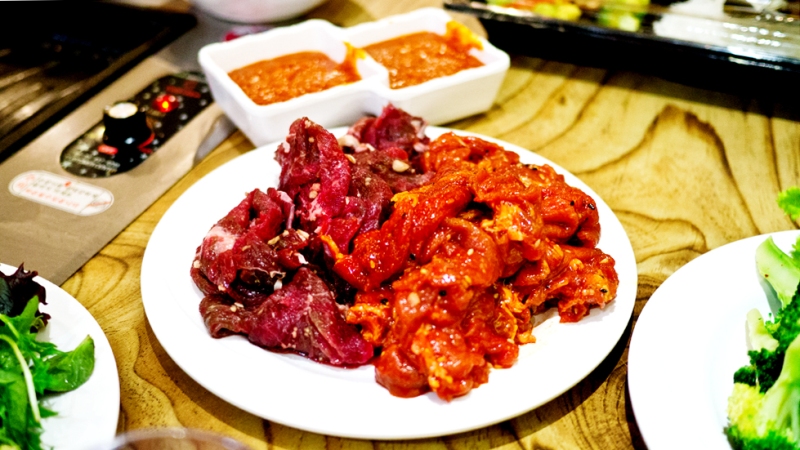 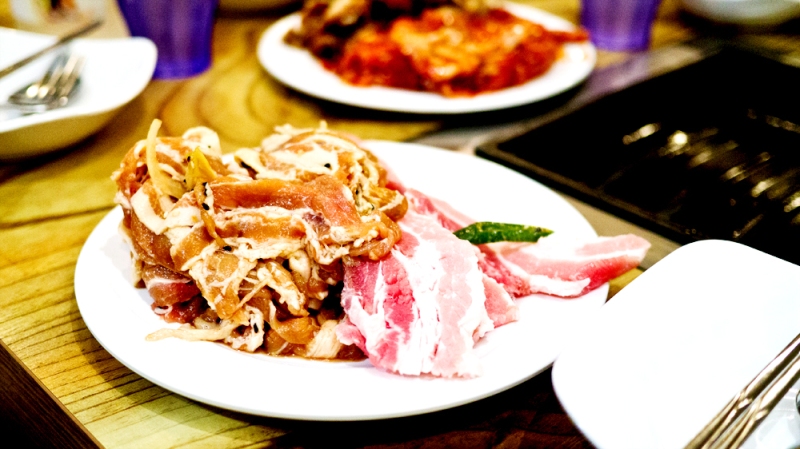 so, even I think that’s quite a few too many plates of marinated meat, but I’m loving the colors and hence keeping them here (the perks of running ya own place, eh?).

in all defence, they are a rather good illustration of the many different styles of meat and marinades on offer – korean grilled meat is a many varied beast composed of sweet-and-savory bulgogi, fresh-as-is strips of pork belly, spicy bean-paste marinated meats – and I really liked the variety here. 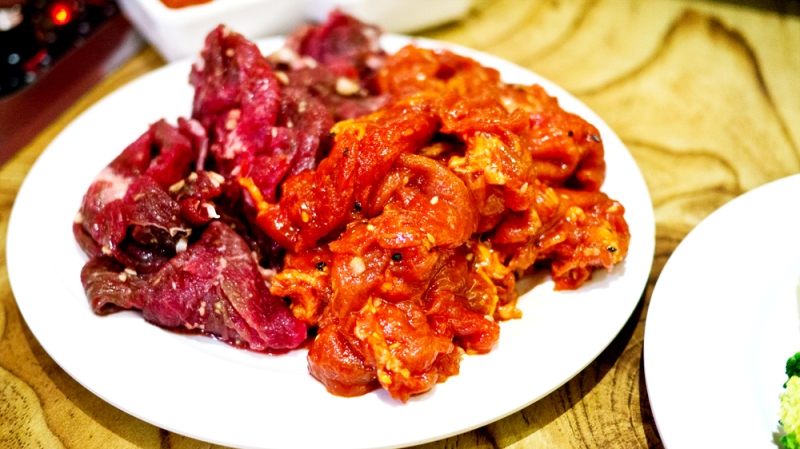 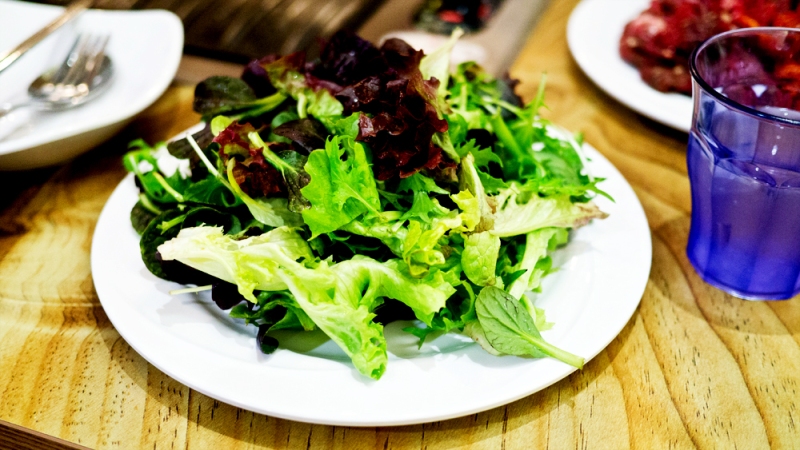 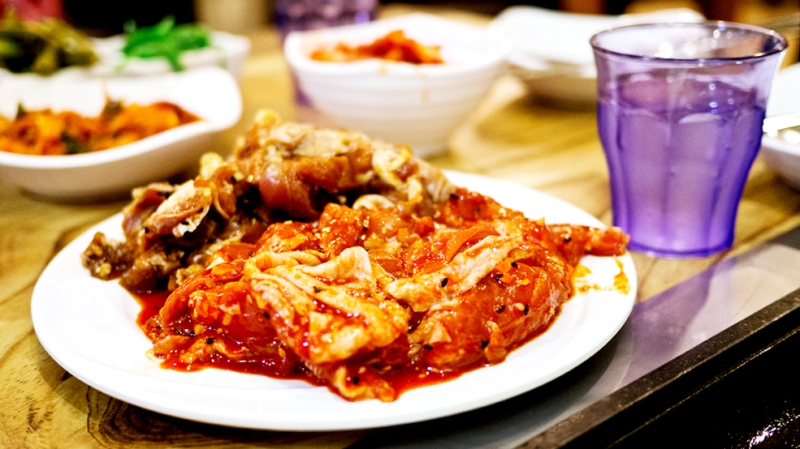 the lunch buffet composes of an impressive spread of ever-replenished types of meat (pork, beef and chicken), a good selection of crisp salad greens (very important!) and condiments, and a slightly sadder array of cooked items that include japchae (springy sauteed sweet-potato noodles with vegetables), steamed rice and many other things that I’ve quite clearly forgotten.

flavours are as-you-expect and quite simple, and it’s very easy to fill up on the protein – we all know that makes for a healthy meal (discounting those strips of pork belly, of course). 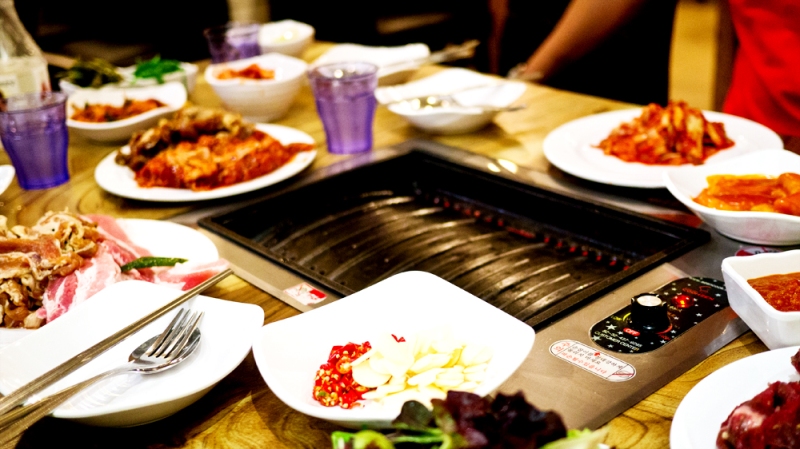 if you’ve never had the pleasure of a korean barbecue, do as follows: spread meat out across the grill for a good sear (overcrowding makes for a more sauce-y meal), grab it off just as it shows a bit of color and char, and wrap in a lettuce leaf with a smear of garlic and chilli paste. delicious.

nothing sophisticated – but in that I find authenticity. it reminds me of those korean dramas where the leads sit down in a barbecue place and drown their sorrows in meat and beer, where food is meant to be both simple and comforting – and nothing overwhelmingly spectacular. cheap – almost unbelievably so – and with a more than adequate spread (in both quantity and quality), this place is fantastic if you like korean food and can bring an appetite.

p.s. the ventilation is almost non-existent, so only head here if you’re going home straight – or you’ll be a walking advertisement for the next few hours at least (not that there’s anything wrong with that, if that’s your jam).