the food here, is quite good. it’s casual, inexpensive, gives me the same trendy+fuss-free vibe as my favourite sushi tei and busaba haunts, and we came twice during the trip – which really is probably all that’s needed to be said.

it’s essentially street food that’s prettied up to suit its furnishings, and unlike most modern interpretations of local food – it both succeeds in being exciting but approachable. it’s not high-falutin’ gourmet or startlingly good in and of itself – but it is very likable, and we got more-than-decent meals both times.

the menu was pretty interesting to us – there were loads of items on there we don’t see on typical thai menus back home (and we eat the cuisine quite a lot) – many variations on larb and salads (which lead me to suspect an isaan bend), as well as an array of items we had seen on the streets: grilled snakehead fish and various other meats.

essentially a large array of items with very inexpensive price tags, the place lends itself to over-ordering (an especially felicitous happenstance given the fact that I wanted to try all the never-before-encountered items, and those were many). 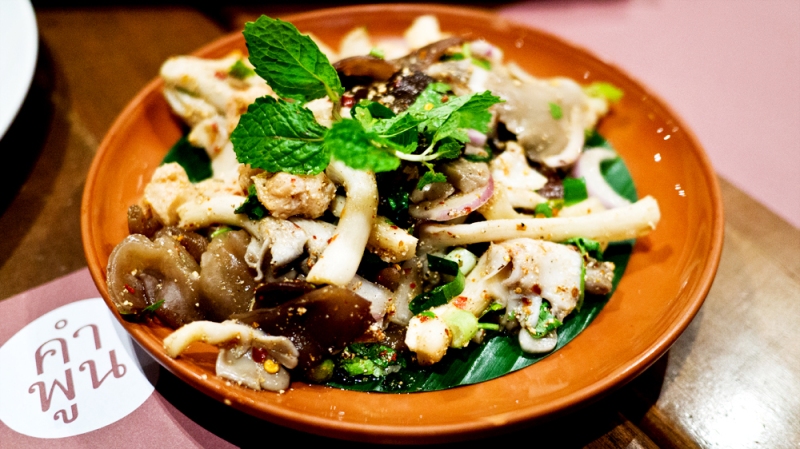 the first visit, we stuck to an order of snakehead fish, mushroom larb and grilled pork and sauteed vegetables. all simple – but what a great array of flavor. the fish I had seen countlessly on the streets and never had the chance to try; I’m not quite sure how it’s prepared as the skin was leathery (almost like smoked) but the fish had that rather distinct texture that comes from being grilled. it’s a mild fish – the head truly reminds you of the eponymous creature – but very boney. worth a try, though not quite a repeat (more because we’re lazy, than anything).

the mushrooms were lovely – a barely warm salad tossed with toasted ground rice and dressed in a tangy concoction – as were the sweet grilled pork (though quite fatty) and the sauteed vegetables. 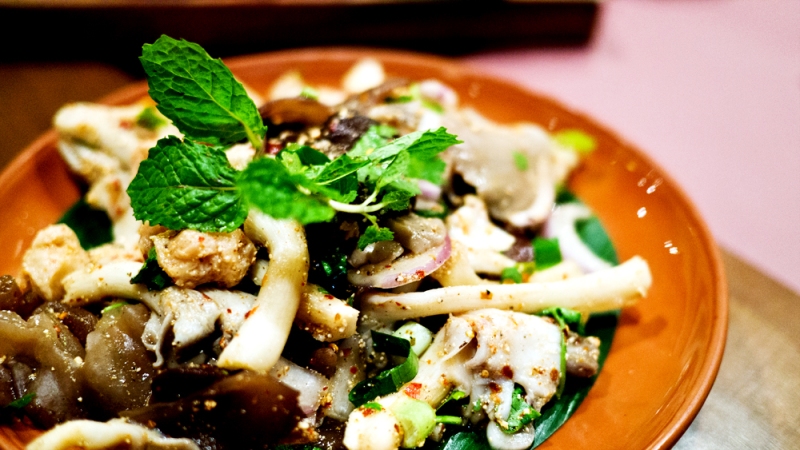 really, an easy meal that inspired a repeat.

this second time, we sat down for lunch to a table that held a bowl of chilled vegetables (why hadn’t we got this before?!) – long snake beans, cabbage wedges and local herbs, all raw and good with the dipping sauces. 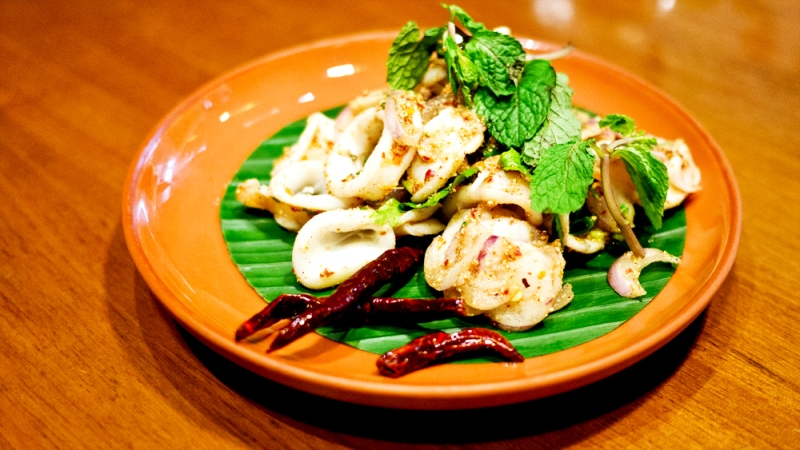 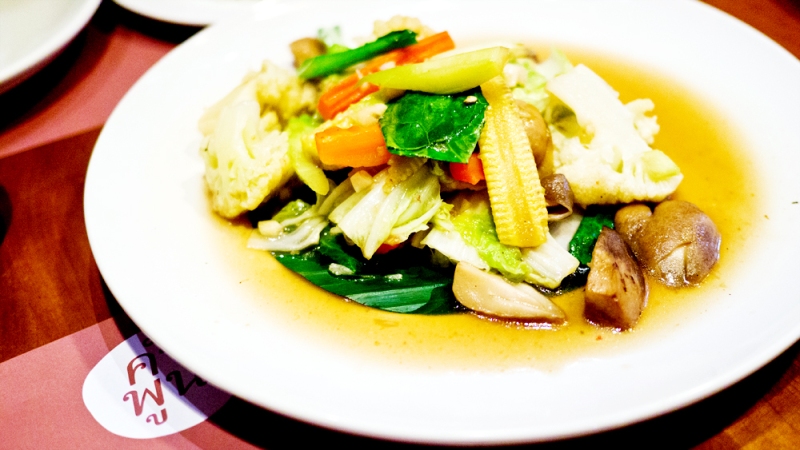 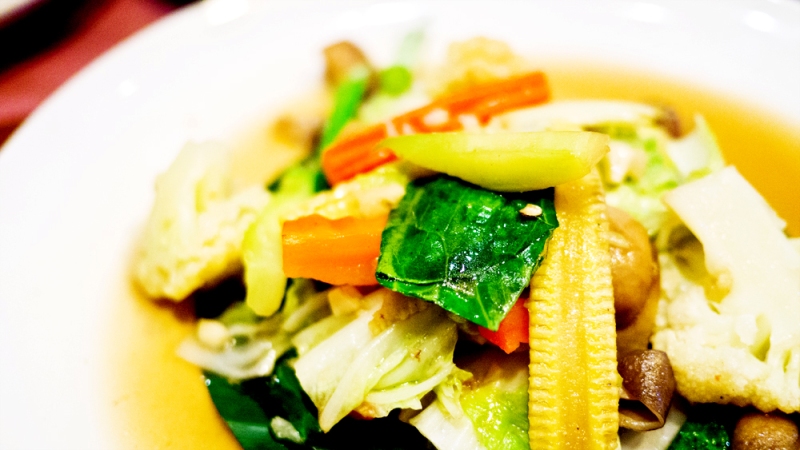 I liked the larb so much I ventured a repeat with a squid variant – same experience, just with nicely-cooked squid – and the vegetables.

yes, I know, those photos are a repeat – but hey, too pretty to resist. 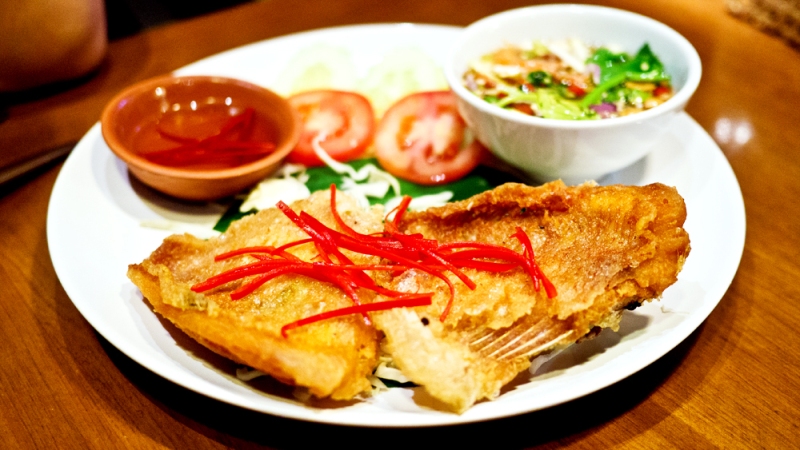 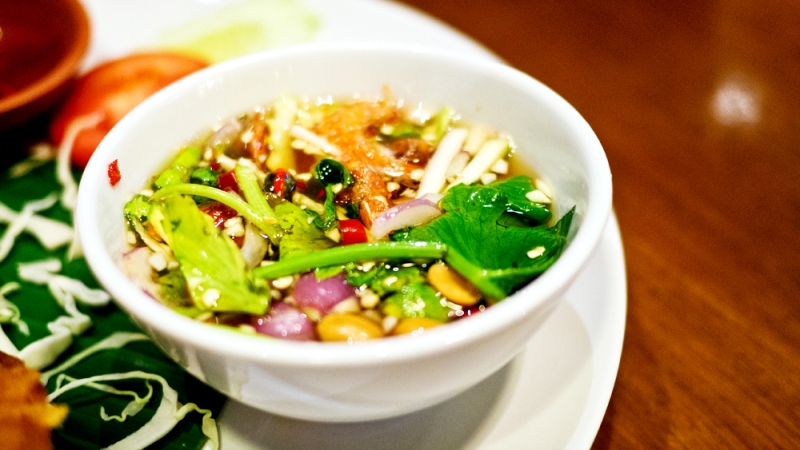 the least successful order we had were these fried fillets of fish. nothing wrong with them, actually, but they were pretty pedestrian crispy (the sort that cooks the flesh brown all the way to the interior with a tiny bit of white left in the middle), though the sour-spicy sauce on the side was darn addictive.

we finished with some grilled beef – slightly stringy (though we’ve found beef over thailand to be this way) but still pretty moist – which I actually liked better than the pork.

so – good meals both times, and with each dish an average of about five singaporean blingaroos, they were fantastic deals too. fantastic choice amongst the options at the central world mall.