let’s try a bumper of a post this weekend – starting with a roundup of the lovely things I ate in taipei. I mentioned earlier (during my market summary – so technical, eh?) that taipei is a great city for eating, and it stretches far beyond its too-famous markets. 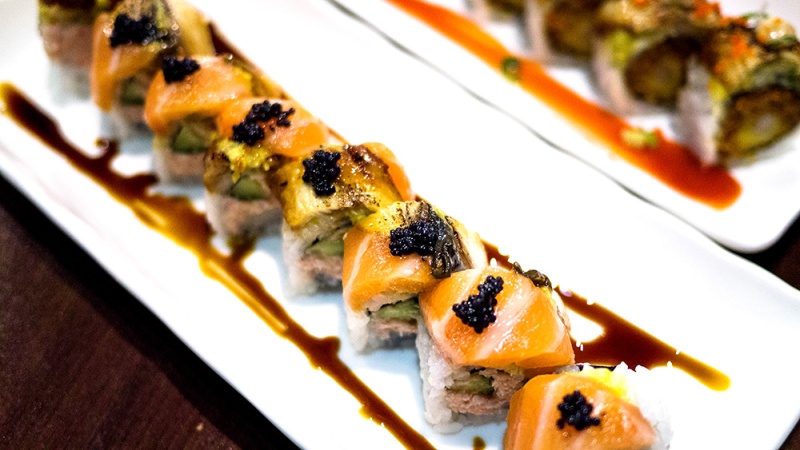 this is an unexpected one. californian-style sushi is akin to the sort of modern sushi we get in sushi tei – strong flavors and sauces complementing the more traditional base of rice and fish. very fun, and quite the sort of the thing I like to eat – which might strike me as a pleb amongst all you sushi purists – this place does it well: a large menu of sushi rolls with provocative names like Johnny Can’t Walk and the Marilyn Monroll and ingredients like cream cheese and sriracha running through.

the rolls are honestly a permutation of the same ingredients, so you might find it difficult to order mutually-exclusive (ingredient-wise) sushi. not a problem though – have two or three of the delicious ones here, and then go somewhere else to finish up that stomach space. fish is fresh, ingredients generous, and reasonably-priced for a unique meal. 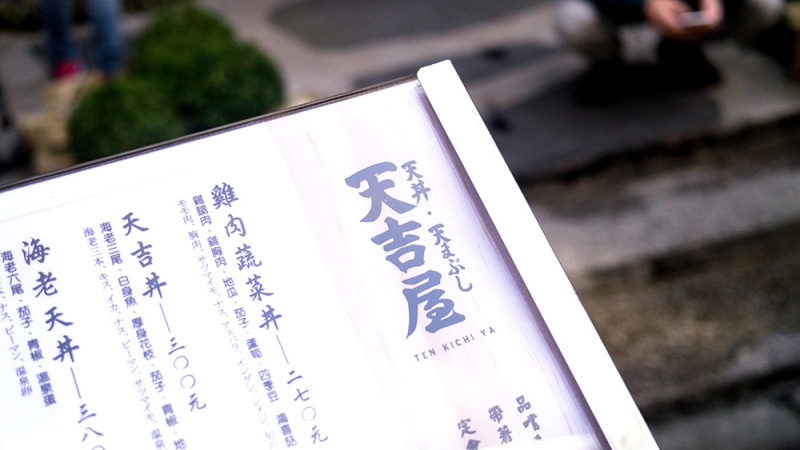 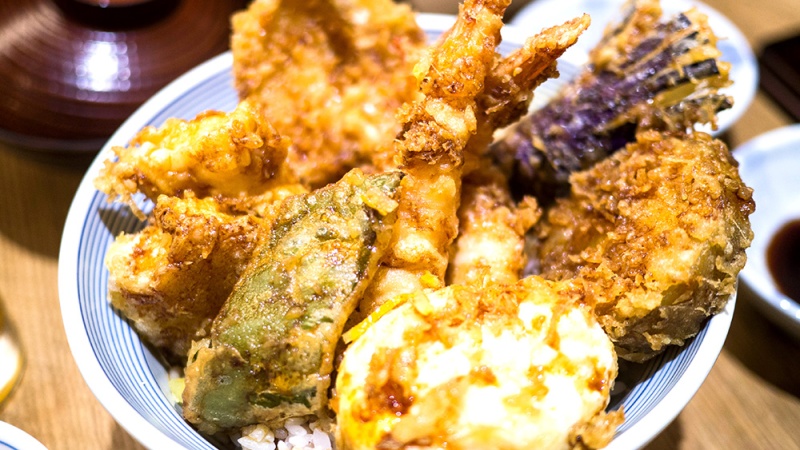 Ten Kichi Ya
this place specialises in japanese fritters, with a menu of about 5 permutations of fried bits and bobs over rice. we were lured by the long queue (herd instinct going strong), grabbed a number, and had meal part one at NCIS before coming back to this place.

we went for the second-cheapest option, which had a mix of vegetables and two prawns in a batter that was denser and more seasoned than the tempura style we were expecting. it wasn’t great: 1. a dark savory-sweet sauce had been drizzled all over, enough to distract but not enough to identify; 2. the fried crust was a little sogged from the steam of the rice; 3. and we left smelling rather like we had stood beside a vat of frying oil. but the complimentary crunchy pickles and tea (don’t order your own, like we did) on the table were lovely, and it wasn’t expensive (at least).

save the calories and skip this one. 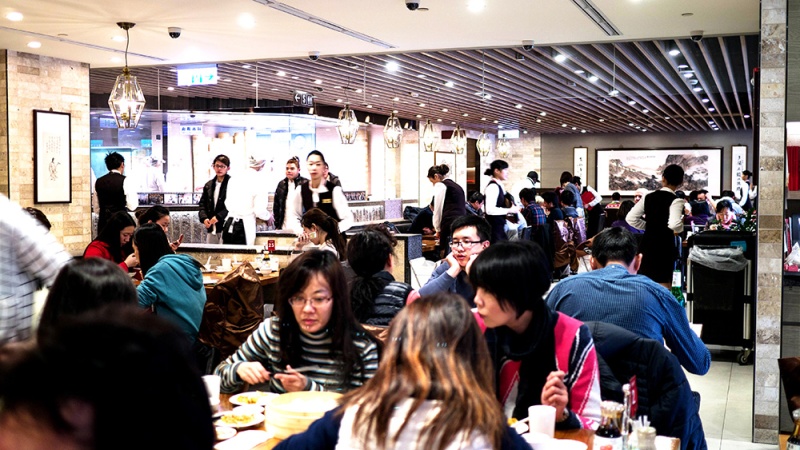 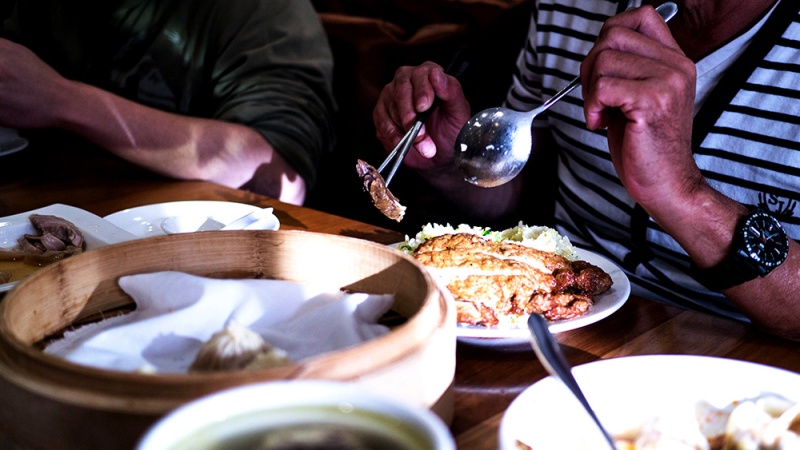 this is a tourist visit more than a gastronomic one, admittedly, though it does help that I like the food served up at this prolific chain of xiao long bao restaurants. there’s nothing nore for me to say here except that it does appear standards are pretty consistent. if you’re new to this place, then a basket of their steamed soup dumplings (bite the tops off, suck the soup out and douse the rest in vinegar before finishing) and some fried pork cutlet atop fried rice never goes wrong. 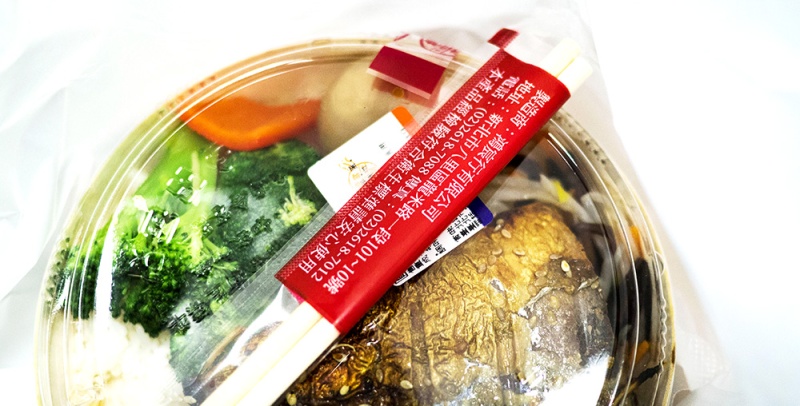 if you’re into food – which might shed a little light on why you’re reading this – then you might know how famous the taiwanese are for their packed lunches. it closely resembles the japanese bento, with a bit of meat and two veg arranged over rice – and you can take your pick from the fair number of stores strewn across the main train station (and any major port of travel, really).

I went with a grilled mackerel do, but the partner had to go for a manlier version with braised pork and delicious marinated eggs. it’s all pretty delicious, in quite the way homemade leftovers are (and a fantastic option over the more mundane sandwich and chips).

jiufen is a coastal town that makes a great day trip from taipei, and was our port of destination after procuring a couple delicious boxes of bian dang. if you’ve been to mont saint-michel in normandy, you’ll recognise the type – a completely touristy town selling its preserved, historically-relevant architecture to a horde of holidaymakers and city-escapers. it’s dominated by a single uphill-veering street lined on both sides with souvenir stores (of the food and magnet variety), and most people come here to grab stuff to bring home.

we did the same, bagging boxes of black-skinned peanuts and mochi and freeze-dried mushrooms (I recommend these as gifts and snacks) – stopping ever so often to snack. one of my favorite things was this bowl of silken beancurd topped with large, sweetened beans – soft and beautifully simple. definitely worth a visit, for both the view and the the experience. 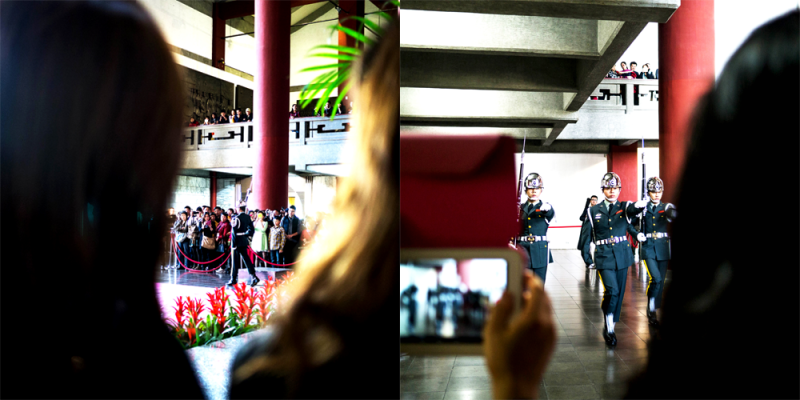 Sun Yat-sen Memorial Hall, or How to Sightsee Amidst Crowds

this is a creative experiment – and it sure helped me get past any frustration I would otherwise have felt. there was a huge swarm of people crowding the memorial hall during the change of guards (very impressive, by the way), and it got pretty darn difficult to get a good view of the proceedings (much less grab a photo).

I spent most of the time dodgin moving heads and ipads, and the rest of it watching the march-through on the ipads of the people in front. I suggest you do the same.

2 thoughts on “taipei, a summary”