great seafood – both cooked in a bag, and out – though a tad expensive, at this currently packed-to-the-roof seafoodery at the very-out-of-the-way grandstand at turf city. this is probably the only outstanding my favourite tunglok eatery – it’s a take on the american crab boil or new orlean boiled seafood in a bag concept that’s taking on in singapore.

it’s very trendy, so I had to wait a while to escape the hypeish period and land a table (reservations accepted, thankfully) – and I’m glad to report that while the boil-in-a-bag concept might be pretty gimmicky, it’s backed up by some stellar cooking. very much worth a visit, even with the price and location (which I think says a lot). 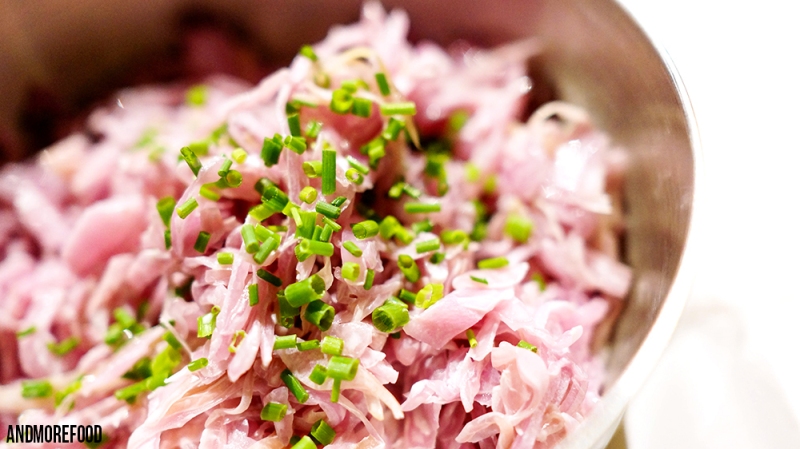 is it authentic, or the best? I’m not sure about the first – and the latter is rather too contentious. we’re spoilt by some pretty good seafood cooking in singapore, but what this place has over our usual chilli-and-steamed-crab haunts is both exoticism and novelty served up wiith quality – what would usually be termed tunglok quality, even if I don’t think the general tunglok establishment lives up to such lauding (this one mostly does, to be clear).

we sat down at a table lined with mahjong paper, chairs almost jostling with each other. the place is dark, it’s packed, and it’s raucous. not necessarily the best for a claustrophobe. three saucers of some pretty delicious condiments appeared – mild, spicy or extra spicy – all tangy things that cut through that seafoody richness. 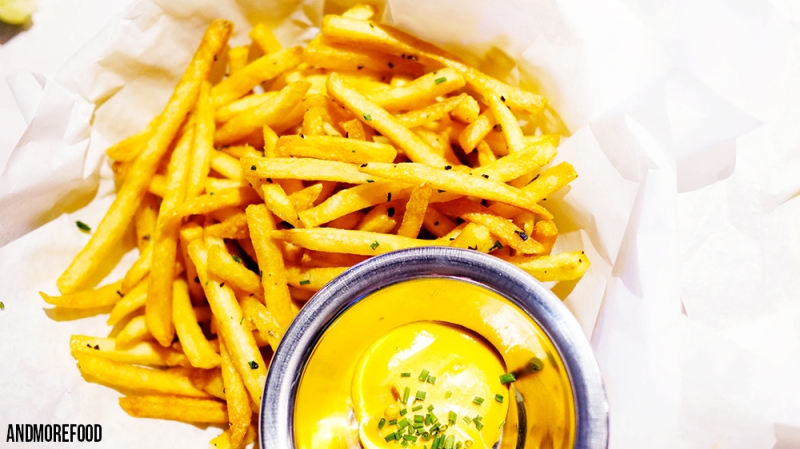 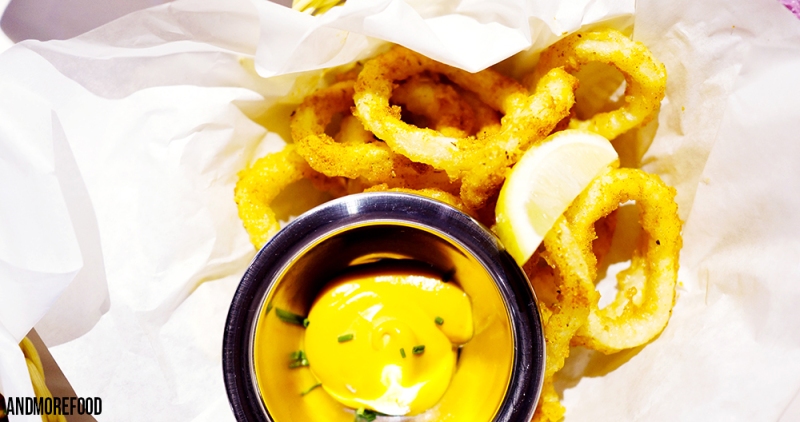 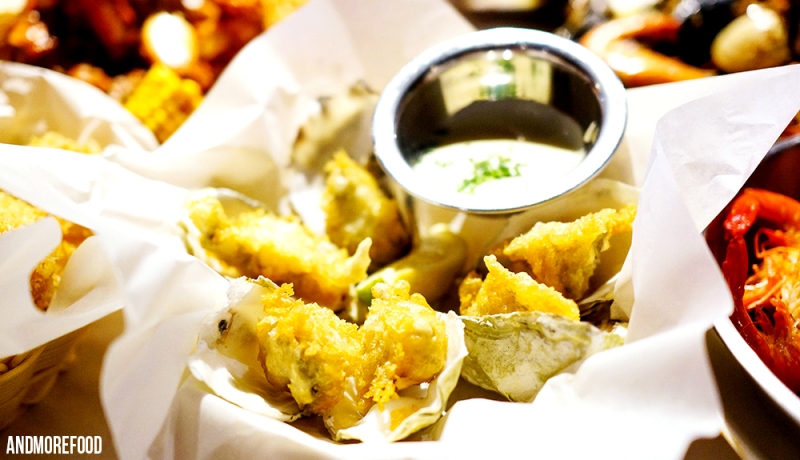 a medley of fried things appeared first – spicy cajun fries with an aioli, lovely beer-battered calamari rings, and battered oysters in-shell – all served in baskets with waxed paper. all properly done up golden brown with crunchy, well-cooked batter and tender seafood – these were good. 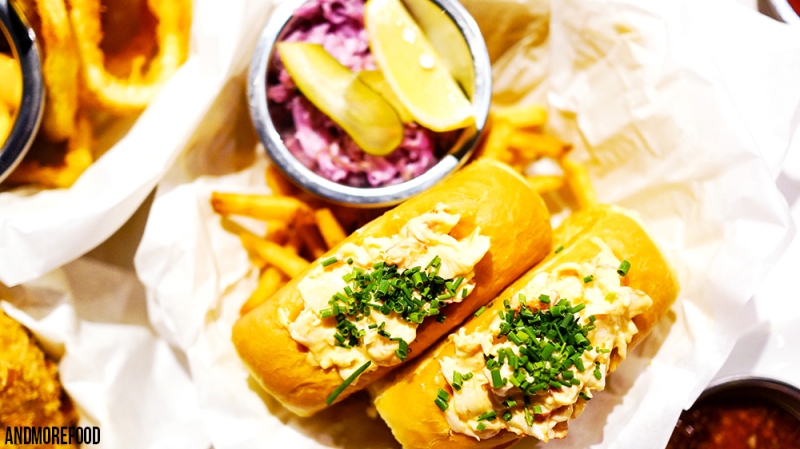 rather less good though, were the lobster rolls. too much mayonnaise, too little too-finely-shredded lobster, it was more binding mayo than seafood in a generic hot-dog-style bun (which isn’t usually a problem, but too much bread now that there was so little lobster). 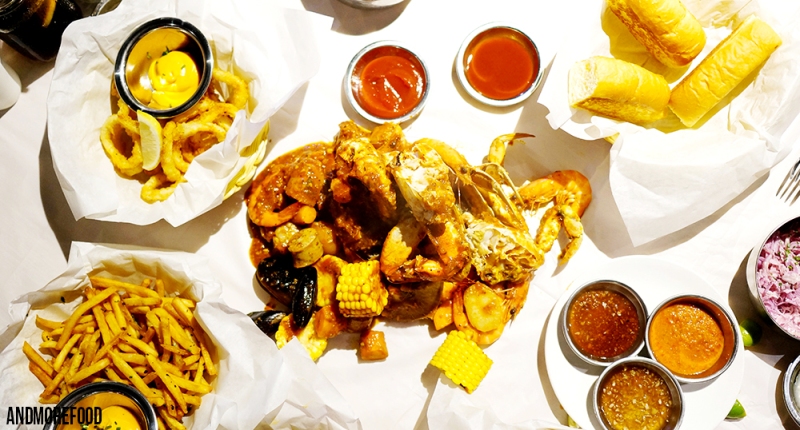 but on to the main star – we had two bags of boiled seafood, one combo bag 1A and 1B. the base of the bags constitute prawns, mussels, corn, sausage and potato – and then a more premium seafood (crab and lobster in our case) is added depending on how much you want to pay.

they were good – properly cooked (in that they weren’t overcooked), and the sauces were sharp with the sweetness of the seafood and well-measured seasoning. very moreish, very tasty – and the potatoes and corn were both tender and delicious. 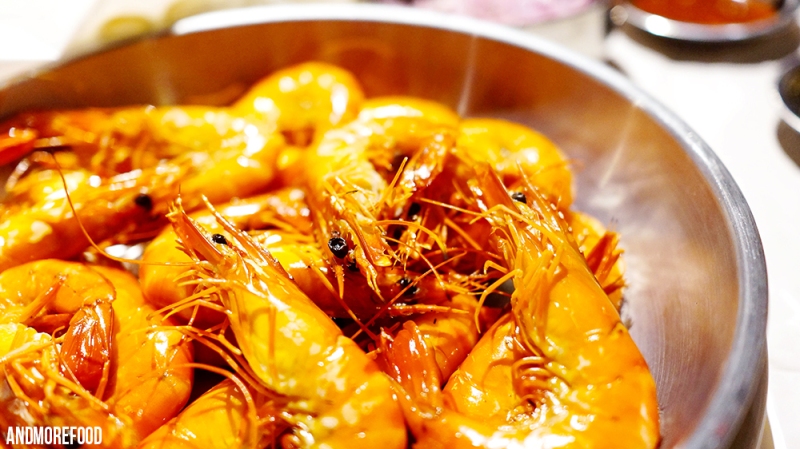 we finished with the flaming moonshine tiger prawns, and this was the best part of the meal. almost reminiscent of drunken prawns, these were fresh, sweet, and simple-y and simply incredible.

so – is it worth the money? still an open question. but it’s definitely worth the visit, despite the distance and the long wait for a table, and the food is really very well done (just skip the lobster rolls).

One thought on “dancing crab, the grandstand at turf city”