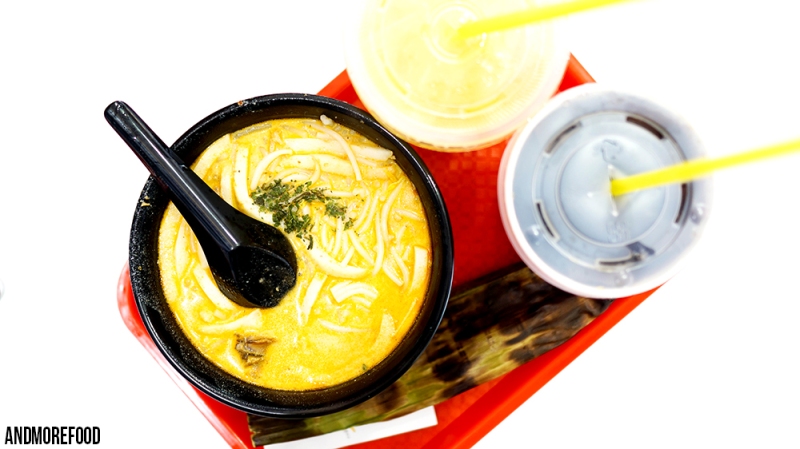 surprisingly fantastic laksa in katong, one of a couple famous places serving this dish. I have eaten laksa less times than the fingers on one hand, and its very attributes are the reasons why I typically eschew local food: too-much-richness as with the coconutty soup and chilli oil, too-much-carbness as with the large bowl of noodles with nominal pieces of protein, and too-much-stress from the heaviness that calls for a post-eat run.

but, this was delicious.

the coconut milk mellowed the savoury base into this rounded, creamy soup with an unexpected lightness, and the tender noodles were slippery bits that worked its way between the fresh prawns and cockles. I certainly didn’t expect to enjoy it nearly this much, and the just-on-the-edge sour of the lime juice was pretty perfect.

the small coffeeshop space is fully air-conditioned, which is fantastic considering the heat and spiciness of the dish, but that luxury does reflect itself in its price. little matter though, as it honestly is more filling than whatever you’d receive at a newfangled cafe for the money, and is likely executed with more skill and finesse anyway.

worth a visit, and definitely worth the money.

for my non-singaporean readers, a little context:

laksa is a dish of white, spaghetti-width rice noodles cooked till tender and served in a curried soup with fresh prawns, dried shrimp, cockles and bean sprouts. there’s also typically a layer of chilli oil on the top, which satisfies traditionalists. katong laksa, so named for the area it invented and made popular, is a variant of the dish made creamier with more coconut milk, and the noodles are cut so it only needs to be eaten with a spoon.

otak is a slightly spicy, curried fish paste steamed or barbecued till solid in banana leaves, served usually as a snack or a side to coconut rice.

One thought on “328 katong laksa, katong”