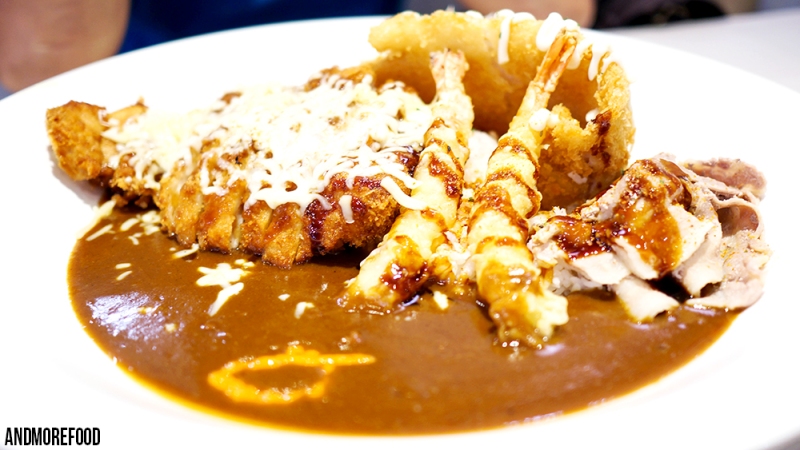 a seriously HUGE plate of rice with delicious japanese curry and fried peripherals at this small not-a-stall-not-yet-a-cafe at the basement of the ion shopping mall.

my sister is a big fan, so of course we had to try it sometime – I do enjoy japanese curries and their tendency toward the spicey-without-the-spicy, chock-full of soft carrots and taters, and it also reminds me of cold london winters and easy post-school meals.

this has one of those gimmicky customizable heat levels, enabled by varying squirts of chilli sauce squeezed into the same base curry – which is flavorful, pleasingly thick (not in a cornflour sort of way) and immensely eatable.

and also, make sure you share. the portions are huge.

we went for the combo, which had EVERYTHING: golden-brown pork and fish cutlets, shrimp tempura and boiled pork slices topped with cheese, all sitting in a moat of curry with a bank of good japanese short-grain rice.

and it was good. we enjoyed it immensely until perhaps the third-last bite, after which it was a little nauseating from the richness and sheer size. my favorite was the large, tender white fish fillet – I’d steer clear of the shrimp, which had a loose tempura coating that wasn’t cooked well enough.

next time (probably months later, given how stuffed I felt at the end), I’ll just get the large fish fillet, with the omelette option.