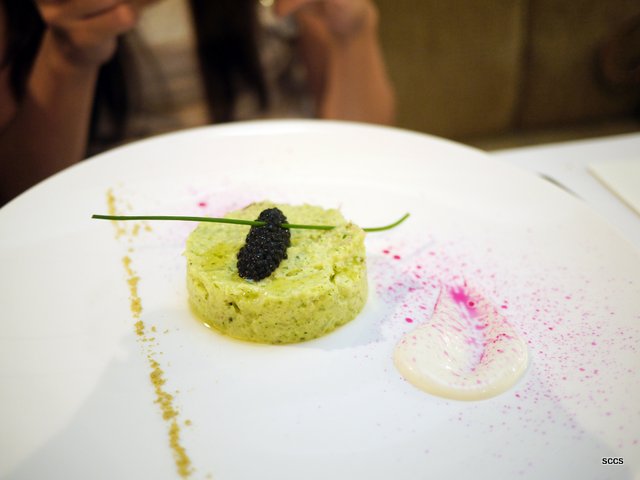 average italian near chinatown. this is a singapore restaurant week post; and yes I know that it’s been a while since restaurant week was over, but better late than never isn’t it? I’ve been spoilt by some remarkably good italian meals in london (zucca and trullo, just to name two), and so fortunately or unfortunately I have pretty good memories on which to base modern italian cuisine. we didn’t have a bad meal here by any means, but I doubt I’ll be coming back.

I’ve been trying to write this post forever, but there is just something about average mediocrity that hardly lends itself to eloquent – or at least protracted – prose, but I’ll try to at least complete it.

there was a set restaurant week menu with five courses, out of which only the meat had two choices.

started with a warm cauliflower timbale with avruga herring caviar in dill dressing – really chopped up boiled cauflower tossed with a green sauce and toped with caviar. this was an interesting dish, though the cauliflower was boiled slightly past al dente, and coupled with the viscous sauce made for a rather too-creamy dish. it was also rather bland to boot, and lifted only slightly by the (not-very-distinct) caviar served on top. the dish was also served lukewarm and I think it would have been of much greater interest had it been cold.

the second dish was a shooter of hot seafood cioppino bisque soup with grated orange skin – again, really a slightly thin seafood bisque. this wasn’t really served hot – so it was rather meh. on the other side of the table was a mushroom soup dished up for my allergy-ridden friend which also was alright, though I remember it being rather watery and though offensive, also nothing great. I have to mention now that we had received, after ordering, a plate of rather unimpressive and almost-stale-tasting bread – I mean, come on! an italian restaurant just needs to excel in its carbs – this was terrible. not even worth dipping into the bread.

the best part of this meal was next, a homemade “tagliatelle” pasta with light “taleggio” cheese fondue with baby peach in white truffle flavour. I didn’t – and don’t – understand the quotation marks around the words since these aren’t, by any means, new or uncommon words. this pasta was a creamy carbonara, with a great and savoury cheese sauce. I was initially rather wary about that baby peach on top, but it was nice. the texture reminds me of the chinese picked fruit often sold in sealed plastic bags, but it had an alluring flavour of truffle. this is probably the only dish I might go back for, if ever.

after this was the meat courses, a sea bass fillet and cherry tomato stewed in squid in sauce with marjorant and a braised wagyu beef cheek in barolo red wine and served with lemon mash. decent dishes but nothing to shout about, really.

dessert was described on the menu as a 70% dark chocolate and almond timbale “bonnet” AND a double cream flan “panna cotta” with caramelized black pepper sauce”. since those two descriptions were separated paragraph-wise, we took it to mean two different desserts (and were therefore proportionately excited), but it came as a tiny pannacotta in a large plate, surrounded by a moat of dark chocolate sauce and topped with mint.

this was a pretty good dish actually, and I could have had a lot more than the tiny portion they provided. the dark chocolate sauce was really addictive and very tasty, but the pannacotta was just a little on the stiff side, and its firmness betrayed the presence of far too much gelatin for stability. a pity though, as it could have been fantastic otherwise. I lapped up the chocolate, and am unashamed to say I left the plate bare.

I’ve spent nearly the good part of an afternoon considering the right words to string together for this post, and I have to say that that in itself betrays my indifference over this meal. not bad, but not great, and strangely, pretty memorable in its utter commonality.

One thought on “oso ristorante, chinatown”