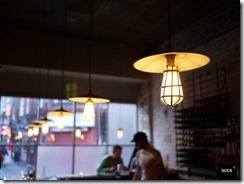 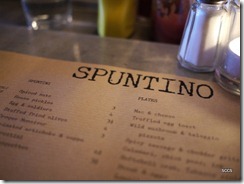 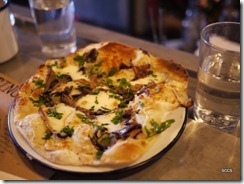 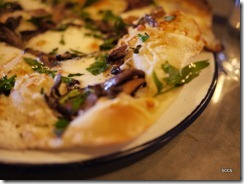 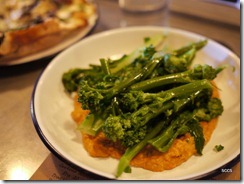 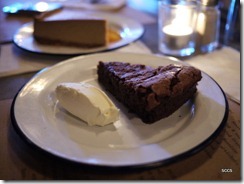 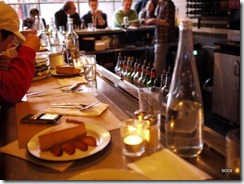 very special american in soho. I must have walked past spuntino countless times while in soho, though I probably always dashed it off as one of those dodgy stores that you never really want to get caught into. but I have always wanted to come here and since copita wasn’t open today – why isn’t it open on sunday?! – it seemed like fate had it all planned out.

anyway, unassuming – to the point of broken down – storefront aside, spuntino is this weird mix of the relaxness of a cafe together with the informality of bar-eating. we were lucky to have come earlyish and gotten seats immediately as the store filled up very quickly by 1pm.

I’m not sure how to describe this food other than american-style tapas. it’s very much like reinvented and very high quality comfort food in small taster portions. we started with the complimentary pop-corn, salty in parts and generally a little oilier than typical but still nice. after that, our orders came by in comfortable spurts: ham croquettes, reminiscent of the cheese on lobster thermidors + soft shell crab, not impressive like a japanese one and quite lacklustre actually, since that white garnish on the side was rather tasteless and the mayo uninspiring + mushroom and taleggio pizzeta which was very good + sprouting broccoli on a bed of what seemed to be very chunky savoury peanut butter – very tasty + squid with garbanzos in ink which I liked but wasn’t particularly outstanding.

these were really rather good, but then dessert came. a cheesecake, for which I can’t remember the description, but tasted salted caramel-ish, and was so good, amazing good. and so was the chocolate whiskey cake, but then again I have a weakness for chocolate cakes. at this point I decided to order the peanut-butter-and-jelly-sandwich because I could not understand how it could cost 50p more than the other desserts and also curiosity would have eaten me alive if I left without trying it. it came, like stiff white bread on crumbled peanuts and overflowing jam and if you wondered like I did initially if it was some sort of artisan bread on homemade jam – and felt horribly cheated – then YOU ARE WRONG. it was peanut butter ice cream frozen into a bread-like shape, and it was very good.

I doubt there’s a better recommendation beyond saying that I’d come back here again, even given the large variety of dining options in soho. so good.

best of all, it was a lot cheaper than I had expected given that we were ordering without care, which makes this very inexpensive and brilliant value for a special dining experience.